I’m very happy to announce Asteroids for Hackvision. This arcade classic gives you real arcade action written completely using Arduino. You can download it from the Hackvision games page, or order it pre-loaded on a Hackvision.

Here’s how the controls work: 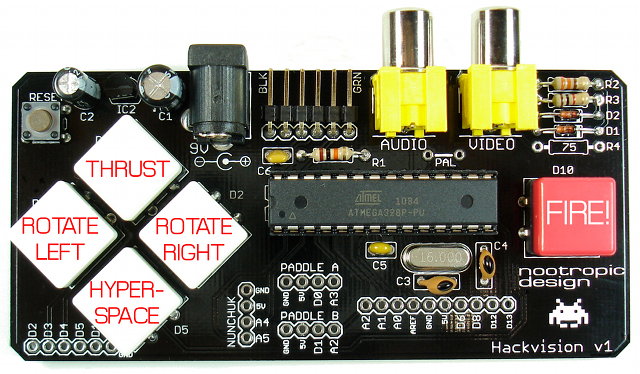 The main loop of the game looks basically like this. Some details are omitted, but this is the basic idea: This game is all about collision detection. While the game is running, the code needs to detect the following collisions:

This sounds like a lot of work, but the ATmega328 has more than enough speed to perform all these computations many times per second. The key to these collision detections is using a “point in polygon” algorithm which determines whether a point is within the bounds of a polygon defined as a set of vertices.

Notice that the vertices are read from the AVR flash memory using the function pgm_read_byte(prog_uchar *pointer). I stored all the bitmaps and vertices in flash memory to conserve SRAM. This is critical when developing games on the ATmega328 since it only has 2K of SRAM. For more info on using flash memory, see the Arduino page on this subject.

With this game I took the sound design to a new level. The TVout library provides a simple tone(frequency, duration) function for generating tones using PWM on Arduino pin 11. This mechanism is very limiting when trying to create sounds for games. It’s easy to start a tone and have it play for a specified duration, but it’s difficult to create sound effects that require the rapid changing of frequency while still allowing the game to continue forward.

I needed a more dynamic mechanism to create the laser shot sound effect which requires the frequency to drop rapidly at a fixed rate of change so it didn’t sound too choppy. The solution was to take advantage of the VBI hook feature of TVout. VBI means Vertical Blanking Interval, and it’s the time period between the end of one screen frame and the beginning of the next frame. TVout draws at 60 frames per second (with NTSC), so there are 60 VBIs per second. The TVout function set_vbi_hook(void (*func)()) allows you to specify a function to be called at the end of every frame. This means you can specify some code to run 60 times per second at a perfectly uniform rate.

I created a function soundISR() to run at each VBI. This function checks to see if there is a sound playing, and a flag tells it whether the sound is the FIRE sound (laser shot) or EXPLOSION sound. Then the frequency is changed accordingly (e.g. for laser shot, decrement the frequency by 100 Hz) and the pin 11 PWM registers adjusted accordingly by the function setPWMFreq(unsigned int f). The sound effect is still initiated by calling tv.tone(freq, duration) and terminated by the TVout library, but my function modifies the frequency 60 times a second as needed. This led to a much better way of generating sound effects without interrupting game play.