This Audio Hacker project is similar to the Four-Sample 12-bit Sampler project but now we can loop the samples and mix them together. Now we call them “tracks” instead of samples. It demonstrates how audio samples can be combined so that they are mixed at the output.

Load the Audio Hacker example sketch File->Examples->Audio Hacker->Looper. With this sketch you can record 3 different tracks and play each of them back in a loop. You can adjust the loop delay by using a potentiometer associated with the track. The loop delay is the time delay before playing the sample again. A delay of 0 just plays the sample over and over again with no delay.

For this project, I used the DJ Shield because it provides all the buttons and pots. 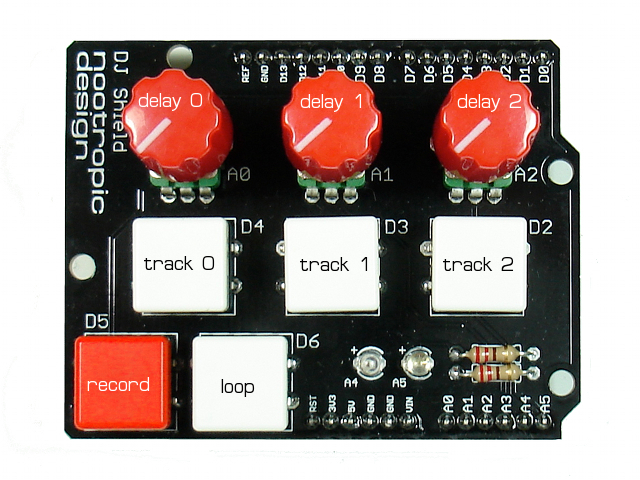 You can build it on a breadboard if you want:

When the record button is tapped (pressed and released), it toggles the “passthrough” mode for the input. That is, when the sketch starts, the input is passed through to the output so you can hear it, but you can enable/disable the passthrough by tapping the record button.

If the controls are confusing, just play with it for a while until you get the hang of it. You can enable debugging by uncommenting the line #define DEBUG and open the Arduino serial monitor with speed 115200. This will show you information about what is going on in the sketch.

Audio signals in this 8-bit project are represented as a series of 8-bit values in the range of [0,255]. Real audio signals are best described as waves that can have both positive and negative values, oscillating around a midpoint of zero. Audio signals mix together in an additive manner, where positive and negative values “cancel” each other out. Before we mix two signals together, first we normalize them so that the midpoint is 0 instead of 128. So 128 is subtracted from each value to give it a range of [-128,127] and we store the result in a signed integer. Now we add the values together to get the mixed signal.

It’s possible that two signals mixed together have exceed the maximum value of 127 or gone below the minimum value of -128. In this case we need to “clip” the value to the maximum or minimum. This will sound like distortion/noise when this happens. Read this for a better understanding of clipping.

After mixing signals together, we adjust the final value upward to the range of [0,255].

In order to do all this mixing quickly, there are some compromises. The sample rate is 18 kHz and the samples are 8-bit audio.

The memory is divided up as follows: track 0 is on the first SRAM chip (128K) and can hold about 6 seconds. Tracks 1 and 2 split the second SRAM chip and are about 3 seconds each.