Defusable Clock Used as Prop in ‘The Tomorrow People’ Episode

I am so excited that the nootropic design Defusable Clock was used as a prop in an episode of the new TV show The Tomorrow People on the CW Network! The episode “Kill or Be Killed” aired on October 30th, 2013. If you watch the episode online the Defusable Clock scene is at about 29:30. Here is a short clip showing the prop in action:

A special effects company providing services to this Warner Bros. production contacted me in August about using the Defusable Clock as a prop in the TV show. I worked with the propmaster to deliver several assembled devices quickly to the show’s shooting location in Vancouver, BC, Canada.

I then collaborated with a member of the special effects team to provide modifications to the Arduino code to better suit their needs. I doubled the display refresh rate to 976Hz to avoid flicker on camera. I removed the clock functionality and gave them better control over the timer display. I also modified the input functions so that wires connected to the terminal blocks could be used to control the timer dispaly. This way the crew could change timer from off-camera without having to touch the device.

They made a few other cosmetic changes, including removing my logo (!), but I think they did a great job using this device in the dramatic scene. It was a real thrill for me to watch! 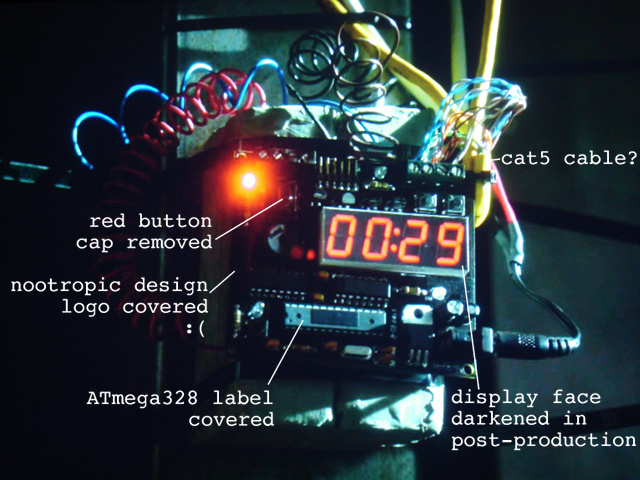 Still frame from “The Tomorrow People”