A Halloween Costume with Source Code

Like many parents, we make hand-made costumes for our kids instead of buying cheaply-made (and expensive) costumes based on licensed characters. This year, my youngest son wanted to be a robot. My wife did a great job making the costume, but I just had to add some cool electronics to take it to the next level.

The electronics are nothing fancy — a simple Atmel ATtiny13 microcontroller that interfaces with two 74HC595 shift registers to light up LEDs randomly. The technical details are below, but in the process of building this, I was really struck by how electronics and computing are being embedded into everything. This week I was making a TODO list and one of the items was “finish source code for robot costume”.

OMG, now the costumes we make have source code.

This is a great example of how technology is becoming increasingly ubiquitous. Ten years ago, this would have been far beyond my reach. But in 2010 I can build this easily. The microcontroller cost $1.04, the shift register chips are $0.25 each, the resistors are a penny each, and the LEDs probably average $0.20 each. Definitely less than $5 for everything. 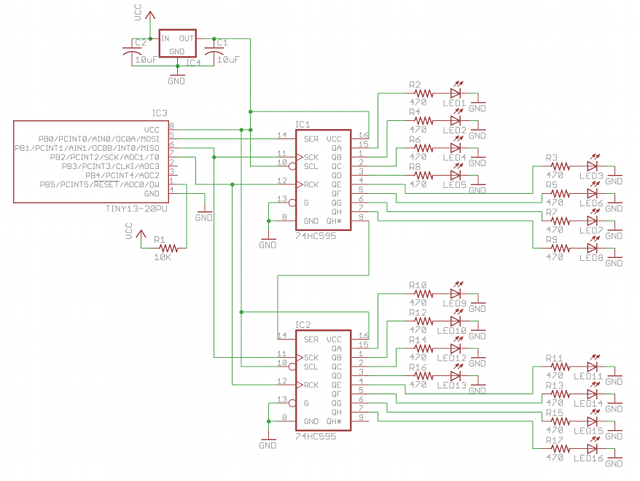 Here is a closeup of the circuit board. There is a piece of clear acrylic protecting it. I ran out of 16 pin IC sockets, so the shift registers are in 20 pin sockets. 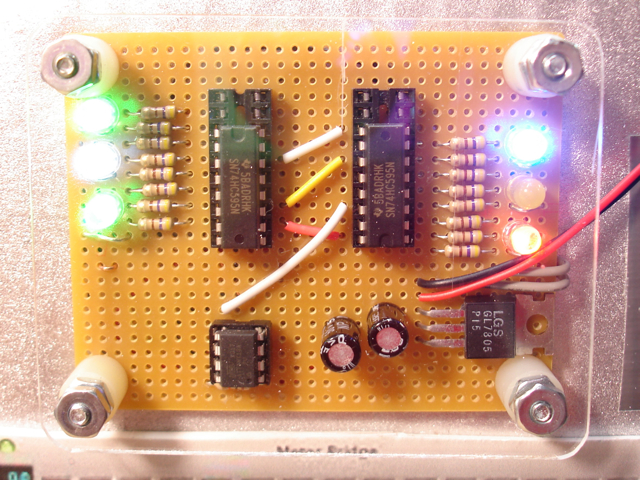 And finally, the simple source code that runs on the chip. I use CrossPack for AVR development. I use avrdude and a Bus Pirate to upload the code onto the ATtiny13 chip.