In a previous article, I wrote all about Iridium satellite communication for IoT projects using an Iridium modem and simple Arduino technology. However, when trying to send a message to a satellite constellation, you never know if the message will go right away or if it will take several minutes. Sometimes there is a satellite overhead, but sometimes you will have to wait a while before one flies over you. I decided to investigate how the signal strength reported by the Iridium modem (AT+CSQ command) correlates to the actual positions of Iridium satellites. So I used the amazing CesiumJS open source JavaScript library and the hardware I built in the previous project to make a great tool that shows how signal strength matches up with the satellite positions! Understanding the reception quality of satellite constellations is going to become increasingly important as companies like SpaceX roll out their low earth orbit (LEO) Internet connectivity solutions like Starlink. 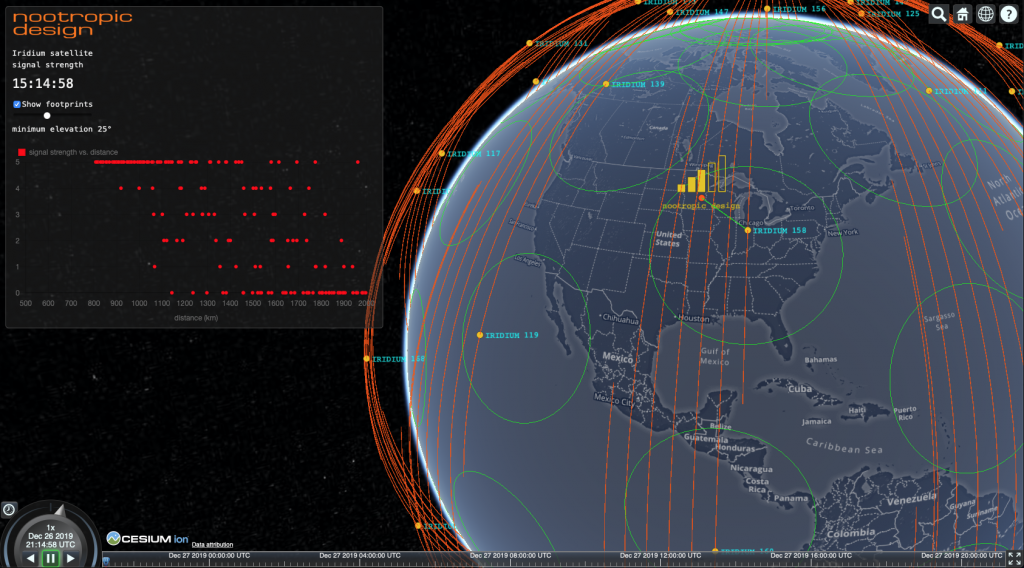 How It All Works

There’s a lot going on here, so let me explain. First, I deployed my simple development board that I built before but this time I connected an ESP8266 to the serial line so that it could send information to the Internet. The Arduino code on the dev board uses the Iridium SBD library to ask the modem for the “signal strength” that it has at the moment. This gives a value from 0-5. It writes this info over serial to the ESP8266 which publishes it to an MQTT topic. So basically this sits outside with the antenna pointed to the sky and asks the modem every 5 seconds what the signal strength is. The GPS module allows me to attach an accurate timestamp to the reading so that the data can be matched up with the satellite position info. 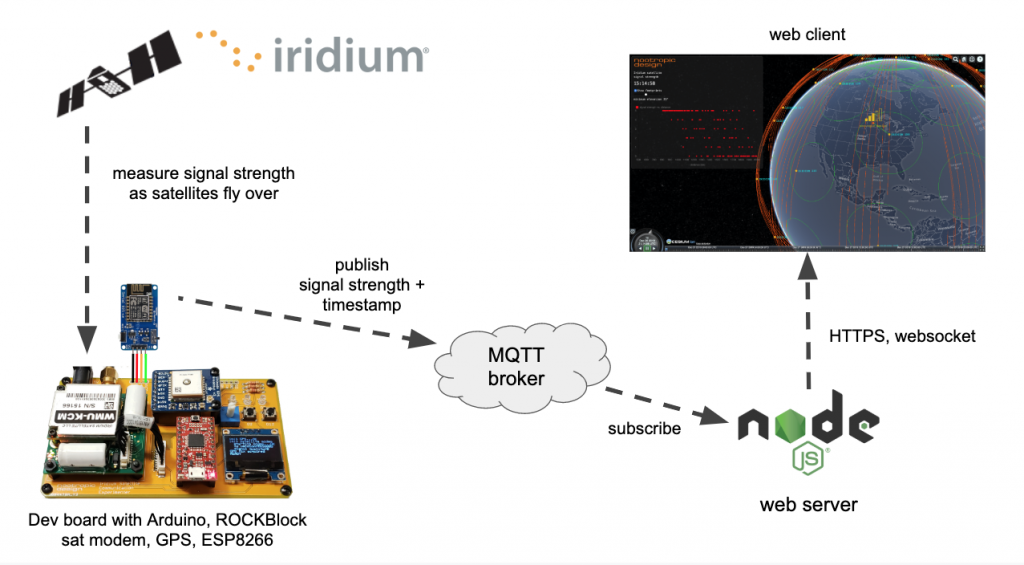 On the software side, I wrote a web tool using CesiumJS that displays the orbits of all the Iridium satellites. It calculates the orbits from the Iridium two-line element sets (TLEs) from Celestrak. CesiumJS is a great way to visualize orbits and show the positions of satellites in realtime. You can zoom in, pan and tilt the globe, OMG it’s just gorgeous. The web client is served up from a simple NodeJS server that also subscribes to the MQTT topic to get the signal strength data as the hardware publishes it. The server sends the data up a websocket to the web client.

In addition to showing the realtime satellite positions and predicted orbits, the web tool also:

Well, does it work? Does the signal strength reported by the modem correspond to the actual proximity of an Iridium satellite? Yes, it does! It’s not perfect, but this is RF, so one should not expect perfectly predictable measurements. There are all kinds of factors at play in RF propagation. But generally speaking, I measure zero bars when there are no satellites overhead, and measure a stronger and stronger signal as a satellite approaches. The scatter plot that is built up over time definitely shows that strong signals (vertical axis) are associated with smaller distance to the closest satellite (horizontal axis).

This video shows the experiment in action. The great thing about building a CesiumJS model is the ability to have all the data stored in a time series that you can play back at different speeds and even play it backward. Since satellites move slowly, it’s very helpful to back up in time and play the sequence forward at higher speeds. And it looks beautiful, too!

You can try this yourself if you have an Iridium modem like the RockBLOCK 9603 modem. Or you can use the CesiumJS orbit visualization for your own projects. GitHub repo: iridium-signal-strength-monitor

Even if you don’t have the hardware to measure signal strength, you can use the the CesiumJS web application to show the realtime positions of Iridium satellites.

Here are some things you will need to change in the software if you want to do this project:

In the code for the ESP8266 MQTTWiFiGateway.ino:

For the webserver and CesiumJS web application, set your MQTT server and credentials in server.js:

To use the MapBox dark imagery like I did, you’ll need to get a MapBox access token. Also set in app.js: