I bought this awesome RGB LED matrix panel from Adafruit and really wanted to see if I could make it display video from an Android phone. It was somewhat difficult, but by using my Android phone, the OpenCV computer vision library for Android, a Sparkfun IOIO board, and an Arduino, I got it working.

All of the hardware and software setup details are below, but before I explain how it works, let’s see it in action:

This is not a beginner project, so if you don’t have experience doing any Android development, you’ll need to be patient. Just getting your Eclipse development environment set up for Android development with the OpenCV and IOIO libraries took me a couple of hours, and I’ve been using Eclipse for about 10 years.

An Android app running on the phone captures video frames and processes them down to a lower resolution suitable for the 16×32 LED matrix. OpenCV is a powerful computer vision/image processing library, and there’s a version that runs on Android. I used the OpenCV library to convert the video frames to 16×32 pixel resolution to match the LED matrix. I also constrained the color space of the frames to 12 bit color. That is, each pixel has 4 bits each for red, green, and blue. That means that each pixel can have 16 different brightness levels of red/green/blue, yielding 4096 possible colors. In other words, all of the image processing is performed on the phone because it’s much more powerful than the Arduino.

The 16×32 12-bit image uses 1024 bytes of memory on the phone (2 bytes per pixel). The Android then uses the IOIO library to write this data out one of the IOIO board’s serial ports. Each frame starts with a two-byte frame marker 0xF0 0x00, then the bytes for the pixel values are written. The performance bottleneck is between the phone and the IOIO board. I can only write about 4 frames per second, even though the serial interface between the IOIO and Arduino is 115200 baud. Since each pixel really only needs 1.5 bytes instead of 2, I could pack the pixel data tighter to get perhaps one more frame per second, but didn’t think it was worth the trouble.

The green wire in the picture below is a serial connection from the IOIO and Arduino. The Arduino code simply reads the pixel values, using the frame marker to know when a new frame begins. The pixel values are written to the LED matrix panel using the Adafruit library for controlling the panel. Driving this matrix is no small feat for the Arduino, since the matrix panel does not do any PWM on its own; the Arduino needs to generate the PWM. This matrix driver software could have been written for the IOIO to control the matrix directly without an Arduino, but Adafruit had really tuned this library for high-performance and very precise timing, so I thought I’d better stay with the Arduino code for now. The result is video at about 4 frames per second. Not very fast, but the color rendition is pretty good. 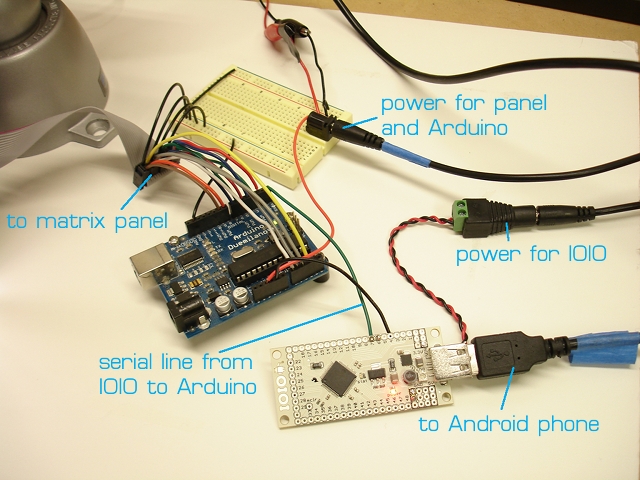 The RGB matrix panel is wired to the Arduino just as Adafruit’s instructions describe. They have an excellent page that describes how the panel works and how to use it.

The RGB matrix and the Arduino are powered by a 5V regulated power supply that can provide 2A (also from Adafruit). The IOIO board is powered independently by a 9V supply that can provide 1A. It’s important to provide plenty of current to the IOIO board so that the phone can charge, however you can adjust a potentiometer on the IOIO to reduce the charging current. As with any project with multiple power supplies, all the grounds must be connected. A single green wire provides the serial data feed from the IOIO to the Arduino RX pin.

I used a diffuser in front of the display to make it look much better. Without a diffuser, the LEDs are simply blinding and it’s not easy to see any image. My diffuser is a piece of acrylic with paper vellum on it. The diffuser is held about 5mm in front of the LED panel (with a little roll of duct tape as a spacer). 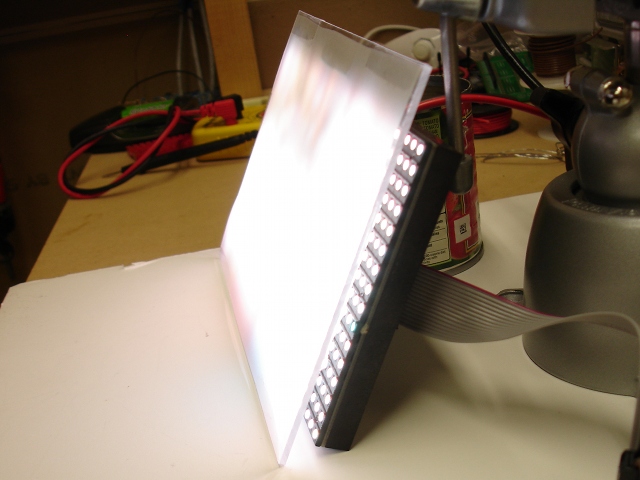 The phone (a Samsung Nexus S) is connected to the IOIO via USB. I mounted above the panel by holding it very gently with a Panavise. 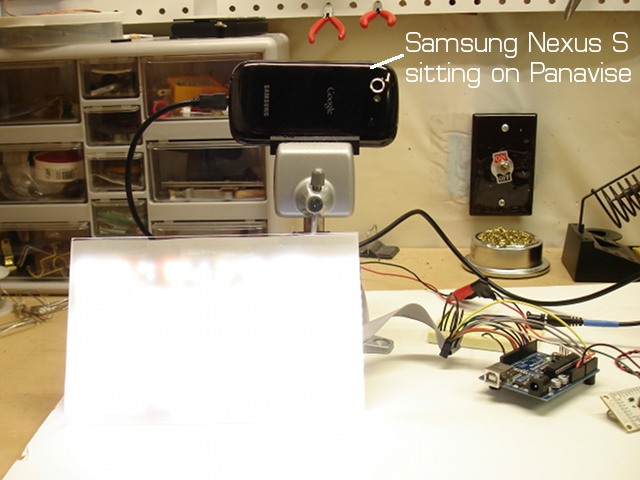 Android + IOIO + OpenCV Software
The hardest part of the software setup is preparing your development environment for Android, IOIO, and OpenCV development. The details of how to do this are beyond the scope of this article, but all of the steps are documented in various places.

Once you have the application running on your phone, this is what it looks like in action. The video image is displayed with the same resolution and colors as the RGB matrix.

Arduino Software
Now that the hard part is done, it’s easy to get the Arduino software installed.