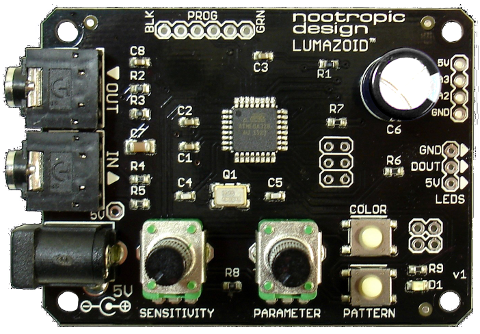 Lumazoid is a realtime music visualizer board that lets you display an awesome light show that is synchronized to your music. Just plug the Lumazoid in between your music device and your audio system, and enjoy the show!

LEDs: 3-wire connection to WS2812 / WS2812B LED strip. No wires will be connected if you buy just the board, but if you buy an LED strip from us the Lumazoid board will have a compatible wire harness connected for you. 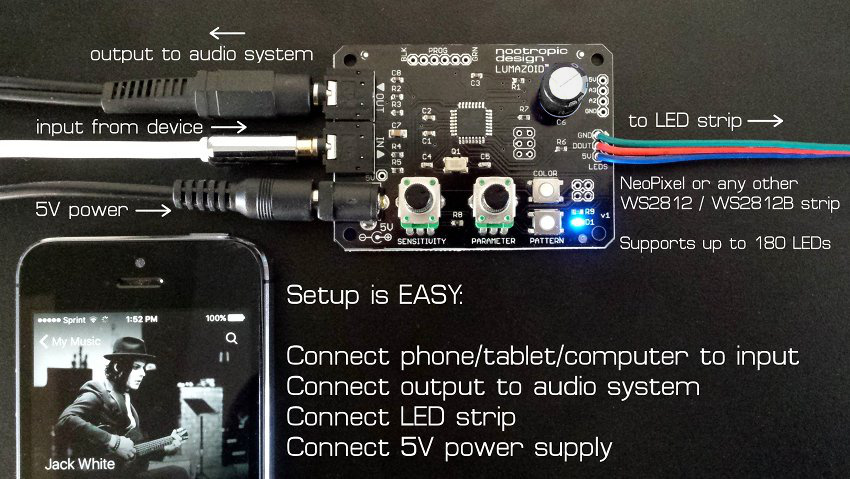 If you design and code your own visualizations for Lumazoid, make sure you consider the current requirements of your visualization.

The Lumazoid is designed for WS2812 or WS2812B LED strips. These are readily available from many suppliers (including us) and are sometimes referred to as “NeoPixel” which is Adafruit’s branding for WS2812B strips. Sometimes LED strips are referred to as “WS2811” but the name WS2811 only refers to the driver chip and not the integrated chip+LED combo. If you have an LED strip that someone called “WS2811” and it has 3 wires (5V, ground, and data) then it should work.

Before using your Lumazoid, you may need to configure it for your LED strip length and optionally adjust the brightness. By default, the Lumazoid is configured to use a 120 LED strip (for example, a 2m strip with 60 LEDs per meter) and is set for maximum brightness. If you have a different LED stip length or would like to reduce the brighness, follow these instructions.

Brightness: hold the color button when connecting power. A rainbow of LEDs will be displayed on the first 8 LEDs. Use the parameter knob to change the brightness. When finished, press the color button again and your configuration will be saved to memory. This will be remembered even if power is disconnected.

LED strip length: hold the pattern button when connecting power. One, two, or three red LEDs will be displayed. Used the parameter knob to choose your LED strip configuration based on the number of red LEDs:

When finished, press the pattern button again and your configuration will be saved to memory. This will be remembered even if power is disconnected.

Lumazoid works best when your music device volume is set to a high level. Smaller devices like phones and tablets will need their volume turned up to the highest level. Use the sensitivity knob to adjust the sensitivity of the Lumazoid. Small devices will require a higher sensitivity setting. A music device like a computer may not need a high sensitivity at all. Just experiment with your device to ensure that Lumazoid is responding to the music the way you desire.

Lumazoid lets you choose from different LED patterns and color modes. You can also adjust the frequency response.

Patterns: Lumazoid has different display patterns for visualizing the audio signal peaks (high amplitude) detected in music. Lumazoid is like a graphic equalizer that shows the strength of different frequency bands, but Lumazoid displays the information in a much more interesting way. There are 8 different patterns for displaying the audio peaks in the music. Press the pattern button to cycle through them. A white LED indicates which pattern is selected. The 9th pattern is “random” mode which is indicated by a red LED. This mode changes the pattern randomly with a random time interval. The 8 patterns are:

Color Modes: Lumazoid has 3 different color modes. Press the color button to cycle through them. The chosen mode is indicated by a blue LED at the beginning of the strip.

The Lumazoid source code is open source and available on GitHub.